JULY 2022: While history suggests long-term equity investors are rewarded with high-single digit annualized returns, behavioral biases can often disrupt an investor’s path to this outcome. Focusing on an investing process that one can control, rather than making erratic decisions influenced by short-term market volatility, is a prudent path to follow. 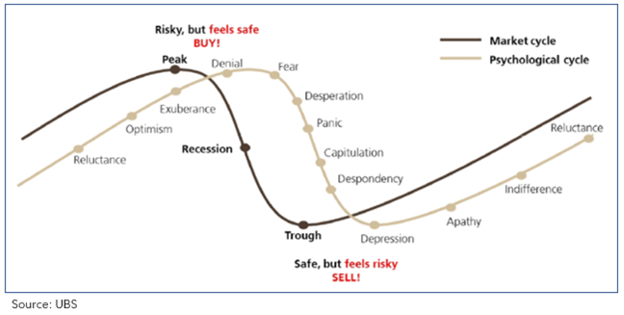 Over the past century, the S&P 500 has returned 9-10% per year, on average. This statistic would seem to suggest that if you have a reasonably long-time horizon, you’ll be rewarded for investing in the stock market and you’ll make money over time. Seems straightforward, right? Yes and no. That long-term average includes many painful bear markets, multiple wars, contentious political climates, and more than a dozen recessions. There will always be periods of negative investor sentiment and fear, as well as months and sometimes years when stocks are punished to varying degrees. Although nobody can accurately predict when a bear market will bottom, staying invested is the only way to capture the “upside” of volatility.

It is true that nobody enjoys bear markets (except short sellers). These periods should remind market participants that investor psychology awareness is one crucial aspect of achieving successful portfolio returns. Traditional finance and investing theories assume that investors act rationally. However, because we all have behavioral biases, remaining rational during periods of volatility can often be a challenge. And what we all hope to avoid is allowing these biases to drive us to make sub-optimal investment decisions.

Behavioral finance is a modern, interdisciplinary approach to investing that helps us categorize investor behaviors. And although we may never transform ourselves into the economists’ “rational” bots, developing an awareness of common investor biases is a good step towards managing them more productively.  Let’s consider three of the most prevalent behavioral finance pitfalls in investing.

“Loss aversion” implies that human beings are wired so that losses hurt twice as much as gains feel good. The upshot for investors is that the pain of losing a $100 bet is twice as intense as the pleasure from winning $100. This bias can lead investors to hold onto poor investments longer than they should and can also make it difficult to get back into the market after selling due to the fear of further losses on the horizon.

One might argue that most of us also have a natural tendency to avoid pain and loss. If you couple that with the likelihood of people overestimating their ability to stick with their investment strategy when a down-market eventually hits, you have a recipe for making poor decisions under perceived duress. Just because it’s obvious that no one likes losing money, it’s nonetheless important to appreciate the very real impact this has on investor behavior, particularly during periods of market turbulence.

The good news: stock market history suggests that the longer your investment horizon, the higher the probability of experiencing positive returns. Cynically stated, the longer you invest, the lower the odds of losing money. Committing to a long-term investment plan, one that recognizes the inevitable ups and downs of the market and one’s own biases, is an effective way to sidestep the pitfalls that coincide with loss aversion. 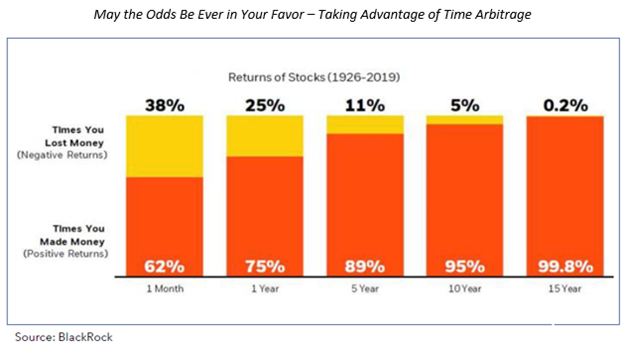 “Recency bias” is the tendency to place too much emphasis on recent events with the belief that similar events may occur again soon. Lacking a crystal ball, we often rely on our experience of recent events and extrapolate them into the future, without considering other important information. This bias can become particularly dangerous during inflection points in the market, adding fuel to budding asset bubbles and crushing bear markets, alike. Recency bias can cause investors to sell into bear markets or buy into bubbles, neither of which is advisable.

To combat this bias, when considering where things may be headed, don’t rely on where we’ve come from but instead focus on what the fundamentals suggest may be the most probable path ahead. During a long bull market, this practice can help us avoid complacency and reinforce the importance of ongoing risk management. And amid a sharp downturn, it can serve as a reminder that things in the future probably won’t be as bad as they might currently feel.

Another effective way to counteract recency bias is to deliberately slow down your decision-making process. For example, it’s very common for investors to increase their trading activity during a bear market, and studies show that this behavior often leads to under-performance. So, take a breath and consult your financial advisor!

As the saying goes, “It’s not what you don’t know that gets you in trouble, it’s what you know for sure that just ain’t so.” “Confirmation bias” theorizes that we tend to seek out information that confirms our existing beliefs. As such, this is arguably the most treacherous bias for investors to be aware of in investing. This tendency holds true not only for markets, but also for politics, religion or any other subject where you have a deeply held view.

As a group, the investment community holds a wide spectrum of views, but if you talk to an individual investor, he/she tends to hold onto his or her specific view very tightly.  Rather than selectively choosing which information to use in investment decisions, try approaching someone you know sees things differently from you and asking them what they are seeing. If you engage with an open mind, you may be less likely to make risky investments and fall prey to asset bubbles.

It’s not an accident of nature that most people exhibit some form of these biases. These psychological traits kept us alive when life and death were on the line (i.e, running from the real bear made a lot of sense!) However, what you can control in investing is dramatically different vs. the physical world. Thus, the behavioral biases that may have kept us alive can also cause an investor to hurt the probability of long-term success.  But being aware of these biases can lead to a more objective assessment of the current market situation. And, as you might expect, the advice of an investment professional can be very effective in preventing irrational exuberance or catastrophizing the impact of market swings on your portfolio.