Bond Market Signals – What Does it All Meme Anyway?

AUGUST 2022: For those of us not on social media, a meme is an image shared on social media, usually with an irreverent, sometimes edgy caption, that represents the thoughts or feelings of a specific audience. Think a picture is worth 1,000 words for Gen Z and the Millennials out there. A meme can cut right to the point much faster than a longer written response because of the emotion that accompanies the words. Also, nobody has a long attention span on social media anyway.

Financial Twitter (or fintwit) has its own meme language. Here is a popular one: 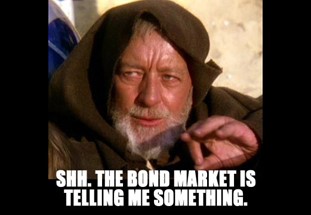 This is making fun of the intellectual superiority that bond market traders sometimes assert. They would argue that it is the market run by adults, in contrast to the equity market that gets far too carried away with the flavor-of-the-month growth stories. But as every joke has a kernel of truth, this meme is usually passed around on fintwit when there is some group thought that the bond market dynamics are telling us something important about the current market at that point in time.

The bond market primarily cares about two things: economic growth and the path of inflation. We do think it is useful to consider the messages from this market when one is constructing an overall portfolio. Thus, here are three things the bond market may be signaling to us about the economy as we head into fall 2022.

There is no question this has been the summer of inflation. Who isn’t complaining about the price of gas, food, or plane tickets? And, as we head toward the mid-term elections, inflation is polling as the number one concern for voters.

That said, the bond market’s forecast for inflation HAS declined this summer. This is apparent in break-even inflation rates, which are defined as the difference between the yield on a US Treasury and the yield on a comparable inflation-linked Treasury bond with the same maturity. Here is the 5-year breakeven inflation chart:

The implied inflation rate peaked (see arrow in above chart) when summer started and has been falling ever since.  This has accompanied a steady decline in a lot of commodity prices, including gasoline.

But, as this next meme suggests, even if inflation is done increasing at the pace we have experienced, there are still worries out there that perhaps are being ignored (for now).

Which brings us to the second message from the bond market…

A recession is a bigger worry than inflation

The US Treasury yield curve plots US Treasuries’ yields against the length of time to maturity. In a normal scenario, the longer an investor locks up their money, the higher the rate of return they should receive. Therefore, this curve should be upward sloping. This is the curve they show you in a macro economics 101 class : 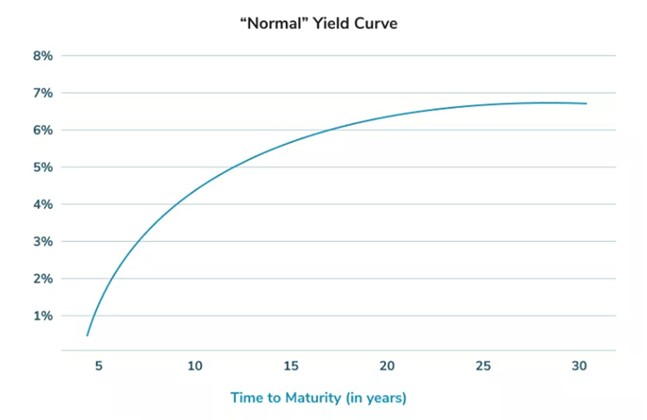 Imagine if you were in the regular habit of making a loan to a friend, and that person had a very good record for paying you back on time. One day, you rip up the loan terms. You want a higher interest rate and want to be paid back in a shorter time frame. That is a red flag!

This is precisely what bond traders are doing in the current market – responding to the perceived near-term risk that the Federal Reserve (or “the Fed”) will keep hiking rates and create a recession for the sake of stymieing inflation. Here is what the current yield curve looks like (spoiler alert: it is a bit of a mess): 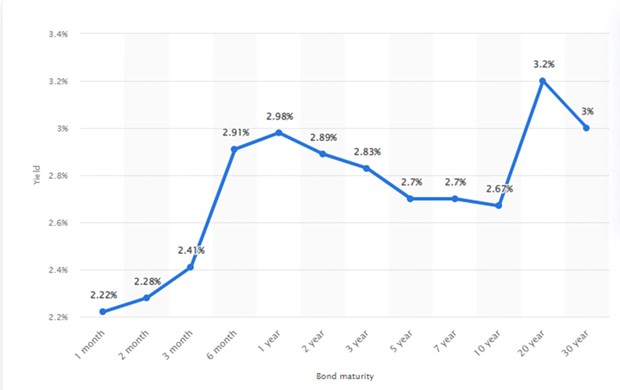 Which brings us to our third bond market message…

There is a futures market that exists to predict the path of interest rates known as “Fed fund futures”.

As of this writing, the message from Fed fund futures is that we will see short-term interest rates peak in March ’23 at 3.65% (it is now 1.75%), and we will see interest rate cuts in 2023. This implies that the Fed will have gone too far in its efforts to hike rates. But before the very strong July unemployment numbers were released (in the first week of August), the market was implying that short-term interest rates would peak at 3.40%. And in May of this year, before all the inflation panic really gripped markets, the expectation was that short-term rates would peak below 3% with no cuts predicted for 2023.

As the Fed has stopped providing forward guidance (a fancy term for overly, painstakingly, and thoroughly communicating any rate adjustments to the market), the bond market will be more obsessed than normal about what the Fed will be thinking after every strong or weak economic data point is released. “Is it two hikes at the next meeting?”, “is it 3 hikes?”, “it might be 4 hikes!”  So, the only thing we can be certain about is that this fall we will see more rate hike revisions with every macro data point. When someone says they know the number of times the Fed will hike in the near term, ask them again in a few weeks.  It will most likely have changed.

Bond markets, like other markets, are not omniscient. But bond investors may spend a little more time thinking about downside risks than other market participants, perhaps because while bonds have limited appreciation, they have a lot of downside risk if economic and inflation forecasts change. Therefore, the bond market is laser focused on the Fed and the path of economic growth as the most important narrative today. But narratives shift as the economy evolves.

And as this last meme implies, today’s worry in the bond market may be completely overlooked in the future. Supply chain issues, though still a problem for the economy, have fallen literally to the bottom of the pool of investor worries. Who knows what the main worry for the bond market will be in the fall of 2023? 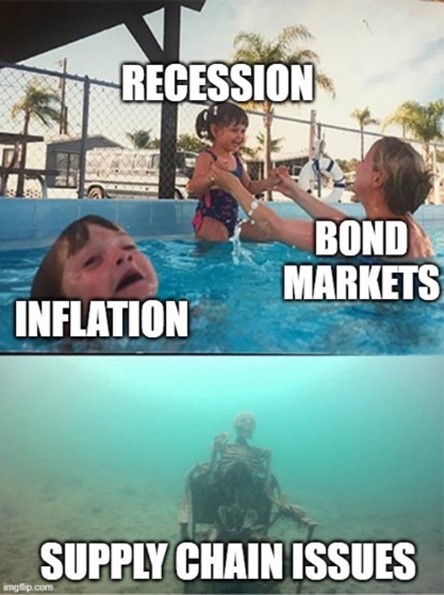